I thought I would start a new segment on this ol' blog: Writerly Ramblings, a place where we can all discuss our writing wins and woes!

At the moment I'm working - or meant to be working - on two different projects: one story that I'm about 3/4 of the way through writing, that needs a sequel planning and an ending writing; and a five book series, two of which are planned out. They are both fantasy/young adult, but quite different, and both are written in third person because that's the only tense I like writing in! And instead of focusing on the first one and getting it completed before moving onto the second one, which is the most sensible and logical idea...I'm just planning the series. Oops! I think the problem is that writing is a bit like Sims: it's a lot more fun planning and setting things up than actually writing it. And it doesn't help that I have a lot of distractions, like... 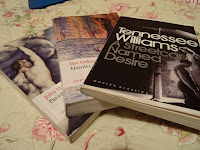 So this is a necessary distraction, but because I have homework and long days and need to reread all of the books in this picture (+ 1984, which I forgot to include), writing slips down the priority list, unfortunately. Paradise Lost and Hamlet especially take forever to read because, while Shakespearean era writing is beautiful and poetic, it requires a lot more attention than all the lovely other books I want to read - and write! 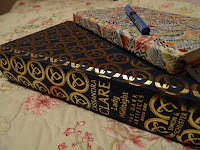 Speaking of the lovely other books I want to read, you may not know, but a little book called LADY MIDNIGHT came out this month...and all I want to do is read it! I'm almost halfway through and loving every syllable, but it takes up writing time! 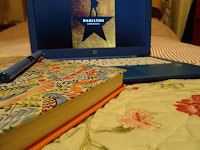 I listened to a few songs from Hamilton, the musical, a few months ago and thought they were ok, but nothing special. And now here we are, with me having all 45 songs on my iPod and trying to learn all of the raps! The problem with this is that there are some songs - like Non-Stop and The Schuyler Sisters - which you can't not sing along to, so I end up focusing on the lyrics rather than what I'm meant to be writing.

But it's worth it, because...well, it's Hamilton!


Amidst all these distractions, I have miraculously managed to plot out all of books one and two of my five book series, and am now starting on the third! One of the problems I'm trying to work out - aside from ignoring other works, as I am so very good at! - is dealing with multiple POVs. The first book is told from one perspective, the second from three, and then in the third I've tried to write from four different people's views. The only issue with that is that I'm slowly realising I can't include everything I wanted into this one book, otherwise it'll be never ending! I think I've solved this as I've changed when things happen, but I know it's going to come up again later on!

I hope you liked this new form of post! Let me know in the comments if you're currently working on anything at the moment - how is it going? What genre is it?