I finished Lair of Dreams over the weekend - at twenty past midnight, desperately trying to finish it
before my Audible free trial ran out - and it has become one of my favourite reads of 2016. I already want to reread it again! But it feels like hardly anyone has read The Diviners, so I thought I would give you some reasons why you absolutely should dive into this series!

1. The writing - Libba Bray's writing style is wonderful and enthralling. There wasn't a single point
where my attention wavered, and the way she describes things is both unique and clear. She weaves so many characters' stories together until they all join up at the end, which is something I love, and although I didn't find The Diviners particularly scary, I did find Lair of Dreams very, very creepy!

2. The setting - The Diviners takes place in 1920s New York, which to be honest was enough for me to be interested! But it isn't just set in New York; when you read the series you become immersed in the characters' worlds. I could easily imagine myself at the Follies or the Museum, and I love how Libba Bray uses just enough 1920s slang for it to be believable without it being over the top, so it felt like natural speech when someone said 'jake' or 'copacetic'.

3. The plot - There is an overarching plot throughout the two novels so far, but it is slow-moving and we find out more about it through the smaller plots of each book. I really like how towards the end of Lair of Dreams I could feel the pace speeding up, and there is a mystery at the heart of the novels which I am desperate for answers to!

4 - The characters - These are really what makes the books for me! I admittedly find Evie - the main main protagonist (there's a lot of different viewpoints) - a bit annoying, but she feels very human; she's flawed and makes bad decisions, but at the same time she's very loyal and compassionate. Each character feels like their own person and I've never gotten confused between them, and there's a lot - Jericho, Sam, Theta, Memphis, Henry, Mabel, and then Ling in Lair of Dreams. They all have strong subplots, too. After reading Lair of Dreams I absolutely adore Henry and his friendship with Ling! 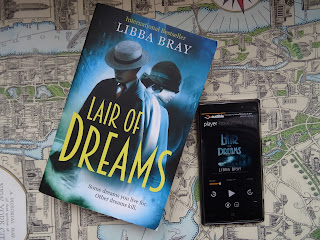 5. The audiobook - I can't speak for The Diviners as I haven't listened to it, but the narrator of Lair of Dreams, January LaVoy, was phenomenal! She put on different voices for each character that were consistent throughout, and she even sang the songs in the book! I think I found Lair of Dreams spookier than The Diviners because of how excellent her narration was.

Let me know if I've convinced you to read this series! If you've already picked up The Diviners, what did you think? Who's your favourite character? (Mine are Jericho and Henry and Ling and Mabel...basically everyone!)
Thanks for reading (:
Posted by Unknown at August 01, 2016