It's that time of month again - the Beautiful People linkup! Although I did answer June's questions, I didn't post them because they were really in depth, and I wanted to keep my characters' backstories secret. As always, thank you Cait @ Paper Fury and Sky @ Further Up Further In for thinking of such great questions! 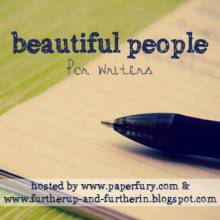 This month I'll be answering the questions about one of my two protagonists -Marisol Celsta.

1. Do they want to get married and/or have children? Why or why not?

Marisol wants to spend her life with someone, but she isn't fussed about getting married as she doesn't see the need for it. She also doesn't like being the centre of attention unless it's for her skills as a fighter. As for children, she isn't very maternal so having a child isn't a priority for her, although she wouldn't mind having one when she's older.


2. What is their weapon of choice? (It doesn’t necessarily have to be a physical weapon.)
It may not have to be a physical weapon, but for Marisol it definitely is! As a Warrior(in training), she has been trained how to fight ever since she was little, so she is skilled in a variety of different weapons. Her favourite remains her sword because she finds it easiest to use, and she knows she's best at sword-fighting.
3. What’s the nicest thing they’ve done for someone else, and why did they do it?
Marisol is not the nicest of characters. As in, she's rarely ever nice. But she can be kind when she wants to be, and when she was twelve she helped out a new person to the Training Facility where they live, and this person would go on to become her best friend! She did it because she heard him struggling with it, and wanted to distract herself from the death of her sister.
4. Have they ever been physically violent with someone, and what instigated it?
Aside from the fighting she does as part of her job, Marisol rarely is violent to people, largely because of her friend's calming influence! But I have just written a scene where she challenges someone to a fight because he cheated on her...and you do not want to get on her bad side! It's fun writing a character who is so feisty.
5. Are they a rule-follower or a rebel?
Generally, she is a rule-follower, although she would never admit to that. At the start of the series, she definitely follows orders, but as the story progresses she starts to make her own decisions and question what people tell her to do.
6. Are they organized or messy?
MESSY. She is definitely messy! Marisol would rather dump her stuff in a corner somewhere and go find something fun to do than tidy everything up.
7. What makes them feel loved, and who was the last person to make them feel that way?

This was a difficult question! I think what makes Marisol feel loved is someone who understands her and lets her be alone when she needs to be. Also someone who values her opinion. The last person to make her feel that way was probably her sister, or maybe her friend. However, as the stories progress a certain someone comes along and changes that...!
8. What do they eat for breakfast?
A LOT. She has a good appetite and isn't a fussy eater, so she'll eat whatever's put in front of her, but if she gets to choose she likes bacon and fried eggs.
9. Have they ever lost someone close to them? What happened?
When she was eleven, she lost her sister. Em was nearly ten years older than Marisol, but they were very close and Marisol kind of idolised her, but one day Em was guarding a diplomat and was killed in an attack. Ever since Marisol has tried to be as good a Warrior as her sister. (Because I'm a writer so characters must have tragic backstories!)
10.What’s their treat of choice? (Or, if not food, how else do they reward themselves?)
Marisol rewards herself by going climbing and hiking on the mountains that shadow the city. At first it was a way to stay in shape, but now she enjoys the solitude and feeling of accomplishment when she reaches the summit. If she's ever unhappy, that's what she'll do.
What do you guys think of Marisol? I have to admit, it's fun writing a character that isn't conventionally nice and is quite grumpy!
Who's your favourite character in your work in progress?
Thanks for reading (:
Posted by Unknown at July 18, 2016