So somehow it is already nearly September, and I am woefully behind on my Goodreads challenge.

Ok, that's a bit of an exaggeration; I've read 33 books this year, and my goal is to read 50. But the reason why I'm on track is because I read the Tales from the Shadowhunter Academy novellas which count as separate books, and there are so many books I want to read but haven't done yet!

My Mid-Year Book Freak Out tag is coming out soon, but I thought I would tell you the 8 books I am desperate to read before the year is out!

1. Queen of Shadows by Sarah J Maas - I have been determined to catch up on this series this year,
and so far I'm doing well! I finished Heir of Fire a few weeks ago, and while I'm not loving the direction the series is going in I do love the world and want to carry on with the story. I also want to read it before Empire of Storms comes out and be up to date for once! 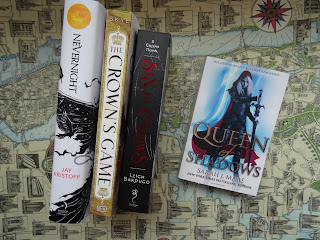 2. Six of Crows by Leigh Bardugo - Everyone adores this book. It's all over Instagram and booktube, and I love love love the sound of it - thieves stealing something dangerous? Yes please! - but for some reason I've never picked it up. I have read Shadow and Bone and didn't mind it, but I think I was worried that I had to finish that trilogy to read Six of Crows. Now that I know I don't, I badly want to pick it up and find out why everyone loves Kaz so much!

3. The Crown's Game by Evelyn Skye - Fantasy Russia? Two players in a game where one will die? What's not to love about the premise of this book? I've heard people compare it to The Night Circus by Erin Morgenstern which is my FAVOURITE books (review can be found here) so obviously I need to read The Crown's Game.

4. Nevernight by Jay Kristoff - This was in my Illumicrate box (unboxing can be found here) and it looks STUNNING. The cover is so detailed, and there are two maps in it. As well as that, the story sounds amazing and various Instagrammers have raved about it! I feel like it's going to be a good winter fantasy read too, so I'm very excited to read it. 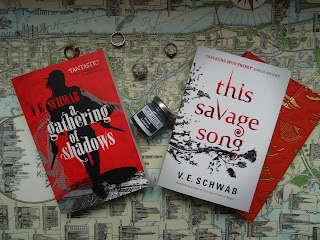 5. A Gathering of Shadows by VE Schwab - How have I not read this yet?! I loved A Darker Shade of Magic, it was one of my favourite books of 2015 and I loved every part of it (mostly Kell <3 My thoughts on ADSOM can be found here!). I want to find out what happens to Kell and Lila and Rhys, and I've heard that there's a new character that people love introduced in this book, too.

6. This Savage Song by VE Schwab - Another probably marvellous VE Schwab book that I have yet to read! This Savage Song sounds incredible, and I think it has something to do with music and monsters which should be a great combination. 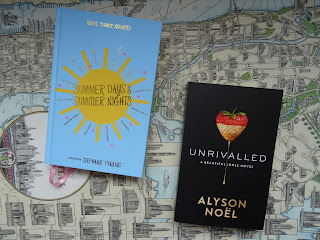 7. Unrivalled by Alyson Noel - Unrivalled is blurbed as being similar to Pretty Little Liars and
Gossip Girl, two of my favourite TV shows. I love scandal-filled contemporary books, they're my guilty pleasure, so I am super excited to see how Unrivalled plays out.

8. Summer Days & Summer Nights, an anthology - Summer is nearly over, so I need to get my skates on if I want to read this soon! I read my True Love Gave to Me at Christmastime and I love how the season plays such an important part in the stories. Also some of my favourite authors - Cassandra Clare, Libba Bray, Stephanie Perkins - have contributed to the collection.

These are the eight books I'll hopefully read before 2016 ends, but this next school year is going to be absolutely manic, so I don't know how successful I'll be! As well as this I would like to reread The Infernal Devices as I read them in winter last year and think it would be a nice tradition.

Do you see a book on this list that I need to read tomorrow? What book are you hoping to read before the year is over?
Thanks for reading (: 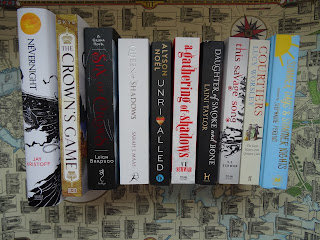