Hi!
I thought I would do another recommendations post, this time recommending my favourite contemporary books! These will be split into two categories: mysteries and summery reads.


1. Dangerous Girls by Abigail Haas - I loved this book so much that I think it's one of my favourite books of 2014! Anna and her group of friends go on holiday to Aruba, but the trip takes a sinister turn when Elise, Anna's best friend, is murdered. Soon, Anna is trying to clear her name, and we discover what really happened to Elise. This was incredible. It has one of the most shocking endings I've ever read, and I think anyone who likes mysteries will love Dangerous Girls.

2. The Burn for Burn trilogy by Jenny Han and Siobhan Vivian - I recently just finished this series, and I'm annoyed at myself for not reading them sooner! On the surface, Burn for Burn is about three girls - Kat, Lillia, and Mary - getting revenge on people who have done them wrong. But once you read Fire With Fire (for those of you who have, my review is here), it sets off in another completely different (but equally amazing) direction. The ending to Fire With Fire was as much of a shock as Dangerous Girls, and the plot remained fast-paced and unpredictable right up until the last page of Ashes To Ashes.

3. The Pretty Little Liars series by Sara Shepard - I have finished EVERY BOOK in this series. ALL SIXTEEN, AS WELL AS THE TWO EXTRAS. There are a lot of books in the PLL series, which often puts a lot of people off, but they are easy to read and I love them. Also, there are points where you can stop reading (after book eight or book twelve, I think) and the story will feel relatively wrapped up. The books are very different to the TV show, though, so if you want to read the books and have watched the show, make sure you know this beforehand. If you still really don't want to read eight books, Sara Shepard has another series out called The Lying Game series (Which I have not read every book in, yet), and a duology consisting of The Perfectionists and The Good Girls. All of these are full of twists and turns and mystery and characters doing bad things and trying to cover them up!


1. The Anna Lola Isla series by Stephanie Perkins - full of gorgeous boys, funny lines, and OTPs, any of these books are perfect for the Summer. Anna & the French Kiss is set in Paris, Lola and the Boy Next Door is set in San Francisco, and Isla and the Happily Ever After is set in New York, Paris and Barcelona, so if you want to travel the world while staying at home, you can! Each is adorable, and they're all linked together in a lovely way.

2. Since You've Been Gone by Morgan Matson - Emily is shy, and her best friend Sloane isn't. One day, Sloane disappears, leaving Emily a list of things to do. She hopes it will lead to her best friend, but it might take Emily further out of her comfort zone than she would have liked. I love how there are playlists and extras in this book, like in Amy & Roger's Epic Detour - which I would also recommend for summer - and it's just so wonderfully suited to summer!

3. 13 Little Blue Envelopes by Maureen Johnson - this is quite similar to Since You've Been Gone, as both of the protagonists have tasks to do set by people they're close to, but 13 LBE takes us around Europe as Ginny follows her aunt's seemingly crazy instructions, all packaged in blue envelopes. Over the summer, Ginny meets friends, sees the world, and also meets a great boy, which I think is what everyone wants out of a summer! Like Stephanie Perkins' books, it allows you to travel to fantastic places like Rome, Scotland, and Amsterdam, and I love how Maureen Johnson writes, so I loved this book.

4. The Threads trilogy by Sophia Bennett - If you love fashion, Threads is probably your kind of book. It centres around Nonie, daughter of a famous model, and her friends Edie - who wants to save the world - and Jenny - who's going to be an actress - as they befriend a girl called Crow, who has the makings of an incredible fashion designer. The books cover a wide range of issues apart from fashion, like body image, poverty, and deciding what to do with your future, and they have a special place in my heart for being one of the first series to really stay with me (and one of the books managed to find a place in my bath as well, so is now twice the size of the others).

All of these books are wonderful contemporaries! I also have lots of contemporary books on my TBR list, so I may do another recommendation post later on in the year. Have you read any of these? What did you think? What are some of your favourite contemporary novels? Let me know in the comments!
Thanks for reading(: 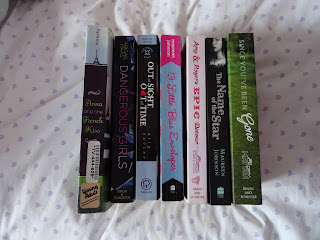