YALC is fast approaching, so I thought I would let you know my plans for Saturday, the day I'll be going!

If you didn't know, YALC (or the Young Adult Literature Convention) is a book convention held in the UK. This year is only the second year it's been running, but I've heard that last year it was very popular. YALC was brought to life with the help of Malorie Blackman, who was Children's Laureate in 2013. This year it's being run alongside the London Film and Comic Con in - unsurprisingly - London, which means that, for people like me who live nowhere near the capital, there will be a long journey for some!

This will be my first ever convention-type-thing, and I am so excited! One of my best friends and I have had our tickets booked for months, ever since I found out that Cassandra Clare will be there on the Saturday, and even though we'll have to get up at a ridiculously early time, I think it will be worth it. There is a small part of me that's nervous, though; I've heard that last year YALC was quite crowded.

In honour of going to meet one of my all-time favourite authors, my friend and I have decided that we're going to cosplay as Shadowhunters (which I'm sure will earn us some funny looks on trains!). I'm channelling my inner Isabelle and wearing a white dress, my Isabelle necklace, and a Lightwood replica ring that I bought from Hebel Designs. However, unlike Isabelle, I will not be wearing seven-inch heels, as a) I can barely walk in three-inch heels, and b) I anticipate lots of queuing and standing around, and it would be nice to be able to still walk by the end of the day. 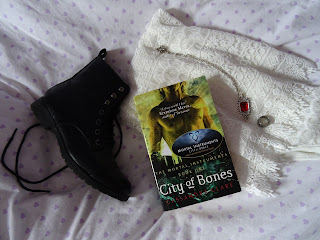 I plan on taking a lot of photos and blogging about the day, and I might even try my hand at vlogging, if I'm feeling brave. I also plan on bringing back a LOT of books! Seriously, I'm thinking of bringing another bag with me in addition to my rucksack, which will be full of snacks and water as apparently food is expensive. I'm already going to bring at least three books for Cassandra Clare to sign: Clockwork Princess, City of Glass, and City of Fallen Angels. And I might even bring The Bone Season if I finish it on time (452 pages in 4 days - challenge accepted!). 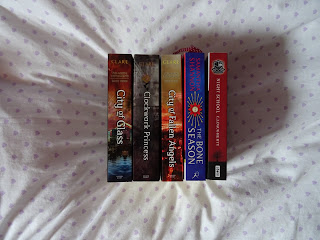 As you can probably tell, I don't know what to expect from Saturday, but I can't wait to find out what a book convention is like. The amount of times I've looked at pictures from BEA and Bookcon and envied everyone for being there...! Are you going to YALC? Did you go there last year? What did you think?
Posted by Unknown at July 14, 2015