To make up for the severe neglect of this poor blog, I've decided to take part in the Beautiful People for writers thingy! The lovely Cait over at Paper Fury and Sky from Further Up and Further In host this every month, and it's an opportunity for readers to get little pieces of information about any current works. I'll be answering for the novel I'm planning rather than the one I'm writing, as I feel like then this will help me develop my characters!
As it's February, this is the Valentines edition, and without further ado, here are the questions!

1. How did they first meet?
My main couple in this are called Esme and Henry, and they met when Henry came to Esme's uncle for help after his family disowned him. Because I am a writer, and therefore a nice person to my characters...(I lie, I am not).

2. What were their first impressions of each other? 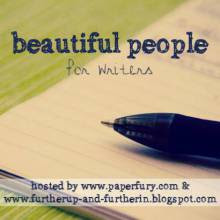 Henry basically fell for her straightaway (because I'm a sappy romantic at heart) but was content just being her friend, while it took Esme more time. When the series begins, she has a sort of kind of very large crush on him, so the first book is just them two being awkward and cute around each other - until things get serious and wars start happening...please refer back to the part about me being a nice writer!
3. How long have they been a couple?
Technically, at the start of the series, they aren't a couple. But, I mean, that could change..possibly... probably...
4. How committed/loyal are they to each other? Would they break up over a secret or a disagreement? Could stress drive them apart? Would they die for each other?
They're fairly dedicated to each other even when they aren't together. So, they fall out over stressed arguments, but they still have each other's backs and never really stop caring, which I think is going to be fun to write. I want them to have a supportive relationship, as that's what Esme needs, and a loving one as that's what Henry needs.
5.List 5 “food quirks” they know about each other. (Ex: how they take their coffee, if they’re allergic to something, etc….and feel free to mention other non-food quirks!)
This is a hard question! I think I'm going to have to make a few things up on the spot, but I guess that doesn't matter too much? (I hope!)
6.Does anyone disapprove of their relationship?
Henry's parents do, for reasons that would contain spoilers so I'm not going to put them here! And a few other people will, I think...But they get over it eventually, so everything's fine!
7.What would be an ideal date?
Probably a walk around the museum, because Henry loves history and Esme likes pointing out who's supernatural in history! Either that or a day in the park with no one to bother them.
8.What are their personality dynamics? Similar? Contrasting? Do they fight a lot or mesh perfectly?
Generally they get on very well, with Henry calming down Esme's rants and outbursts and Esme convincing Henry to stick up for himself. They contrast quite a bit, as she's outspoken and he's quite calm, but that's how they make a good team, and they don't generally fight about big things (apart from when they do, like once).

9. What have been their best and worst moments as a couple?
Best moment: A certain scene on an actual ship that I have planned, involving a sense of impending danger, a ring and a romantic captain! (A ship on a ship...it makes me laugh!).
Worst moment: The time when they argued about a big thing at the end of the first book...and it causes issues for the second book which I'm not looking forward to writing!
10.Where do they see themselves and their relationship in the next few years?
About a year passes in this series, and from the start to the end they go from friends to a lot more than that. As for after the books, I know where they're heading, even if they don't yet (;
So they was my fairly cryptic answers! I'm sorry there isn't perhaps as much detail as there should be, but I'm still working on this and I don't want to ruin anything! I don't think I'll get to write this anytime soon, as I need to plan five books' worth of complex plots, and then a sequel for my other project...the problems of being a writer, eh?