Between the Lines & Off the Page - Reviews!

Title: Between the Lines / Off the Page
Authors: Jodi Picoult & Samantha Van Leer
Synopsis: Delilah loves a fairy tale she found in her school library. She knows it's just a story, but the characters - the Prince in particular - feel so real to her. And then the Prince talks to her. Between the Lines follows Delilah and Prince Oliver as they try to let Oliver live the life he's always wanted in the real world, and Off the Page picks up a few months after Between the Lines.
Rating for both books: 4 stars.

These books are the perfect light-hearted Summer reads! Not only is the plot incredibly appealing to booklovers - speaking to your favourite characters and bringing them to life? Yes, please! - but the writing is easy to read and the characters are fun and likeable. I think people say you can read these books in any order, but I think reading Between the Lines first will make Off the Page more enjoyable as I think you'll feel closer to the characters, having read another book with them in.

If you're thinking about reading Between the Lines, I would recommend it as it left me feeling happy and comforted in the way good contemporaries do.

*SPOILERS FOR BOTH BOOKS FROM THIS POINT ON*

So, I read Between the Lines first, and I found the whole world when the book is closed fascinating! This was such a unique idea, and I loved how the characters of the fairy tale were completely different when they weren't acting out the story. In a weird way, that setting felt more realistic than the high school, which seemed like the typical school you see in films and nowhere else, perhaps because of the stunning pictures and excerpts from the actual fairy tale that were included.

Oliver was kind, thoughtful - the perfect book boyfriend! - and I absolutely ADORED how well he fit into the high school! It made me smile (well, both of these books made me smile all the time, so I guess it made me smile even more!).

I liked Delilah at first, but then towards the middle of Between the Lines, she started to really annoy me. I get that she really cared for Oliver and felt that he understood her in a way she hadn't before, but that was no excuse to completely ditch her friend Jules, whom I really liked! I just didn't understand why she would do that. But I loved how Jules played a bigger role in Off the Page!

Her and Edgar's relationship was quite heart-wrenching, but it felt a little weird that she forgot about Chris. I think that's the thing with these books: if you think too hard about them, they're ruined. You have to suspend belief, but when you do you get an enchanting (like a fairy tale!) read.
Off the Page felt exactly like a rom-com or high school film - which I love - and I think it would make a good film. Off the Page had a stronger plotline than Between the Lines in my opinion, and was also more serious than Between the Lines, which I liked. The ending with Edgar and his mother in the book and Oliver and the Queen - who was one of my favourite characters - out of it was satisfying and felt like the right way to end Off the Page.

The only thing that I did not like AT ALL was Frump's story. He was a great friend to Oliver in Between the Lines, and I loved how he had that (at first) unrequited crush on Seraphima. And then in Off the Page (I think; I read these books one after the other so it's hard to remember what happened in which book) Frump becomes human, and we think yay, now he can be with Seraphima!

And then he DIES. What? I was completely shocked by this, and I didn't think it suited the light mood of the book, especially as everyone else got their happy endings. This was the only plot point that I didn't like, aside from the occasional repetitiveness of Between the Lines.

Have you read these books? What did you think? Who was your favourite character? Mine was either Oliver or the Queen.
Thanks for reading(: 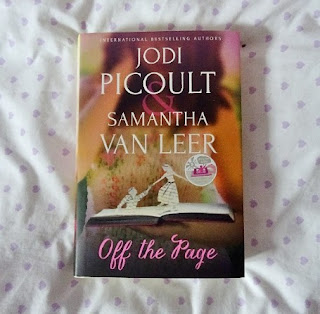