Title: Marie Antoinette, Serial Killer
Author: Katie Alender
Part of a series? No, a standalone.
Synopsis: Colette is looking forward to going to Paris on a school trip, to seeing the sights and spending time with her friends - even if she isn't being completely honest with them. But they arrive when the whole of Paris is gripped with fear by the murders occurring across the city, and soon Colette realises that it isn't a coincidence she keeps seeing a woman in a large wig and dress, and that her life is in grave danger.
Rating: 5 stars (my Goodreads says different because I changed my mind).

Oh my goodness, this book was amazing! I love love LOVE what I call 'ghosty' books. Give me a book with a good ghost in it and I'll most likely enjoy it. I did not just enjoy this book; I absolutely loved it! I read this as part of #TBRtakedown (which failed for me), and now I am furious that I didn't read it sooner. The ghostly element of Marie Antoinette, Serial Killer was actually quite scary (and I'm not normally scared by books), and the plot was incredible. If you like paranormal books, books about Paris, or maybe the dynamics of the girls in Pretty Little Liars when Alison is in control, I would 110% recommend this book.

I'm not sure why I loved this book so much, though, as I did have problems with the main characters, but I really did. I think there are always some books like that, where you can't fully explain why you love them but know that you do. People may not like this book because of the characters (they are pretty unlikeable), and some might not like the writing (which was fine for me, but may not be for others), but I simply loved it, and it's now one of my favourites.

*SPOILERS FROM THIS POINT ON*

The characters in MA,SK are what I would think most people would have a problem with. And it's true that at the beginning Colette is shallow, and believes the popularity and wealth of her friend Hannah makes her a good friend to have. I will admit that there were times when I just wanted to shake some sense into her! But by the end of the book, we have almost a different person: someone who understands that people do nice things to be nice, someone who stands up for herself, someone who will crawl in tight, dark corridors while preparing to face a ghost just to save her friend. It did take a while, and, as I've said, there were points when I wanted to slap her, but there was a noticeable character development.

Now let's move onto Hannah, who was more villainous than the villain of the story! I honestly couldn't believe it when she wouldn't let Colette and Pilar wear those dresses because they would look pretty! She made me so mad, but ultimately I'm glad she was like that, as it led to one of my favourite moments of the book, when Colette and Pilar told her to shut up. Pilar had a good development of character as well as Colette, too.

I adored the plot, absolutely adored it. It combined a few of my favourite things: ghosts, Paris, and history. I love books set in Paris, and I love books set in the French Revolution, so the flashbacks Colette had and the descriptions of the places she visits were very interesting. Although The Order of the Key is fictional, I was so immersed in the story that I was sure it was real, because that's what it felt like! I also liked how Audrey helped Colette; I think that helped her to realise that she was acting badly towards other people and that she should become nicer. And Jules was very sweet, the scene at his home being one of my favourites.

Alender adds the occasional French phrase in MA,SK, but you needn't worry if you don't speak French as she explains it soon after it's been said. I found it quite fun, as I'm doing French as one of my four subjects next year and needed to keep my knowledge of it during the Summer holidays!

Another part of the plot that I liked was the fact that Armand was never really a love interest for Colette. The love triangle that could have been was avoided, and I was so relieved.

What did you think of Marie Antoinette, Serial Killer? Did you enjoy it? If you didn't, why not? I would really like to know!
Thanks for reading(: 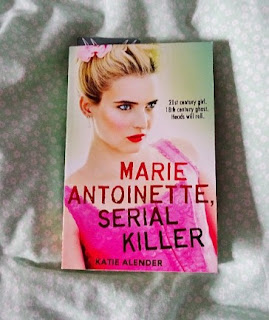