July has ended, and I've managed to accumulate a crap-load of books.
Oops.
But it was to be expected, as July was YALC month (read about my YALC plans here), and I bought eight books at YALC alone. And then I had already bought a few books before YALC. And then it is possible that I ordered two other books off of Amazon after YALC. Possibly.
Oh well! I'd rather have lots of books to read than none.
Because I've bought so many books, and read a lot as well, I'm splitting up my bookhaul and wrap-up, so here is my July bookhaul!

The Haul:
The books I bought at YALC are mentioned in my YALC Adventures post, which you can find here. 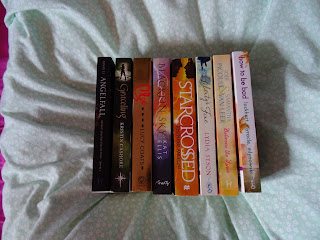 I have actually read four and a half of the books I've bought in July already, so if you weren't going to check out my wrap-up, you should as I had a great reading month! Have you read any of the books I've mentioned? If so, what did you think? Let me know in the comments.
Thanks for reading(:
Posted by Unknown at August 01, 2015