Title: Scarlet
Author: Marissa Meyer
Part of a Series? The second book in the Lunar Chronicles
Synopsis: Scarlet Benoit is certain that something bad has happened to her grandmother when she goes missing from their farm in France. But when the police close her case, she has to turn to Wolf, a street fighter, in order to save her grandmother. And along the way, she finds out that her grandma has been keeping some huge secrets from her...
Meanwhile, Cinder is trying to break out of prison after the disastrous events of the ball. Having to trust the cocky Captain Thorne and still coming to terms with what Dr. Erland told her, Cinder's journey takes her to a certain French farm...
Rating: 4.5 - 5 stars (I can't decide!).

Just like Cinder, Scarlet had me hooked until the very last page. There's something about the Lunar Chronicles that makes you want to read on and on and on until you've finished, and then makes you want to read the next book straightaway. Maybe it's the fact that the characters are so realistic, or that the world is so futuristic, or that the plot is so fast-paced. Whatever it is, it works on me!

*SPOILERS FROM THIS POINT ON*

Scarlet picks up right where Cinder ended, and introduces our new protagonist, Scarlet Benoit. From the start, I knew I was going to like her; just by reading the first chapter you find out that she's caring and loyal to her grandmother, but has a temper (the tomatoes bit was what made me like her!). Wolf was a great love interest, and I did not guess that he was Lunar at all, although I did think that his wolfish behaviour was because of someone altering his genes.

And can we just talk about Mr Carswell Thorne? I loved Thorne so very much! Without him, I think that Scarlet could have been very serious and grim, but Thorne injected humour into the story. I especially liked how he kept teasing Cinder by saying, "Are we having a moment?" and he has become one of my favourite characters out of any book. It also made me laugh when Thorne decided they should search for Princess Selene, as for once we as readers know more than a character in a book!

I was so happy that Iko came back into the story! If you've read my review for Cinder (which you can find here), you'll know that I was devastated when Iko was pulled apart. She was one of my favourite characters in Cinder, and I loved how insecure she was about being a massive ship. She's an android, but her character is just as real as any of the humans (or Lunars, or Cyborgs).

The plot of Scarlet was fast-paced, which was why it shocked me when we were reminded that Scarlet and Wolf had only known each other for like a week. I liked that Marissa Meyer acknowledged that they wouldn't be in love with each other in that small amount of time, and how Scarlet was quite practical about it. I have no idea what could happen next in Cress, but I hope that they help Kai and overthrow Levana (who is EVIL!). In Scarlet we find out more about what Levana is planning, and the powers of the Lunars feel a lot more frightening in this book, perhaps because we see Cinder use her powers even when she doesn't know what she's doing. That unpredictability of Cinder's powers makes her seem dangerous, and now I can see that she might win against Levana, whereas in Cinder it looked very doubtful.

I can't decide whether to give this 5 stars or 4.5 stars. I gave Cinder five stars, but I'm not sure I enjoyed Scarlet as much. BUT I did still really enjoy it, and I can't wait to read Cress!

What did you think of Scarlet? Did you like it more or less than Cinder?
Thanks for reading(: 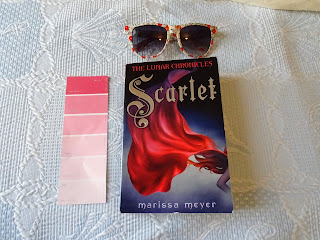